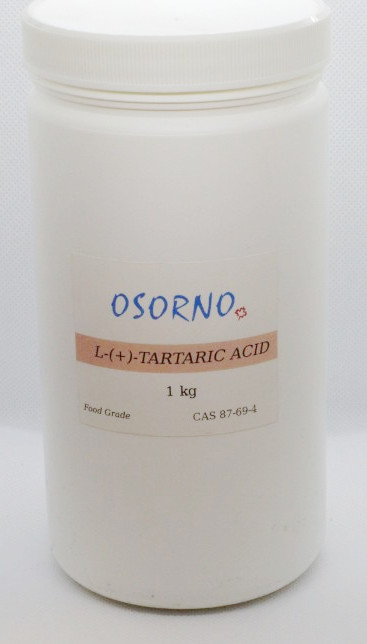 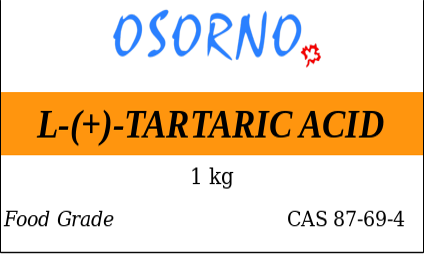 Tartaric Acid: A natural fruit acid with a clear and neutral fruit acid taste, tartaric acid is the dominant acid in grapes. For this reason, it should also be the preferred acid in making fruit wine. Tartaric acid sold by Osorno originates from Italian wine, and is sold as a crystalline product in 1 kg jars. To purchase Tartaric Acid, please visit Osorno Store.

Although tartaric acid is widely found in nature, it is with few exceptions in rather small concentrations. Among those exceptions, are most notably grapes, as can be seen in the graph in Section Acids, along with diverse plants, such as dandelion, tamarind, leaves of agaves (Tequila!), black pepper, and pineapple.

Tartaric acid is highly soluble in water, but several of its salts, most notably potassium hydrogen tartrate (antiquated name: potassium bitartrate, also known as cream of tartar), and calcium tartrate. The insolubility of the former manifests itself in wine casks, where it forms crusts. Deposits of red wine are always deeply coloured. These solids can also settle in bottles when the wine is chilled. To prevent this, it is advisable to keep wine chilled for a few weeks before bottling. The solubility of potassium hydrogen tartrate in cold water is only 0.38 g/l, and even less in wine, owing to its alcohol content. The German name of the crusty deposit in wine casks is Weinstein (wine stone), which is certainly more descriptive than beeswing, one of its English names.

The solubility of calcium tartrate in water and wine is much lower than that of potassium hydrogen tartrate; for all practical purposes, it can considered completely insoluble. This has far-reaching consequences in wine-making when hard water is used in the preparation of batches of fruit wine. On the downside, some of the tartaric acid added to improve the acidity balance of wine is irretrievably lost in the precipitating calcium and magnesium tartrate. On the upside, the unpleasant hardness of the water is removed this way. It is up to the hobby vintner to balance one against the other. Theses authors feel that the benefit of removing excess calcium and magnesium outweighs the loss of expensive tartaric acid.

In mineral-poor wine such as mead or fruit wines with low fruit content, the addition of potassium hydrogen tartrate can noticeably improve the body and mouth-feel of a wine. However, it also nocticeably increases the acidity.

It is important to understand that tartaric acid and its salts cannot be used when oxalic acid must be removed from a batch of fruit wine, this is because calcium tartrate is even less soluble than calcium oxalate. For this reason, calcium lactate is recommended to be used for removal of “oxalic acid”.

Tartaric acid is produced wordwide on a large scale, almost exclusively out of the abundant deposits in wine casks. It is permitted as a food additive in most countries, and roughly 50% of the worldwide production goes into the food industry.

It should be noted that tartaric acid is slightly toxic. Tests with rats showed that the toxicity of LD50 is 7.5 g per kg body weight, which for an adult man (assumed to weigh 70 kg) would amount to 525 g tartaric acid. Assuming that wine has 5.25 g tartaric acid per litre, one would have to imbibe 100 litres of wine in a short time period, which we discourage for this very reason, among others.